Posted by johnna-patton on December 2nd, 2016

Yes it is already that time of year again!  I’m talking about engagement season of course, and this year one of our very own is engaged.  Emily Callison, is a wedding planner on the Distinctive Mountain Events team.  I caught up with her recently, ok I sent her an email, and asked her to share her story and insights about being a Colorado wedding planner planning a Colorado wedding!  Enjoy! 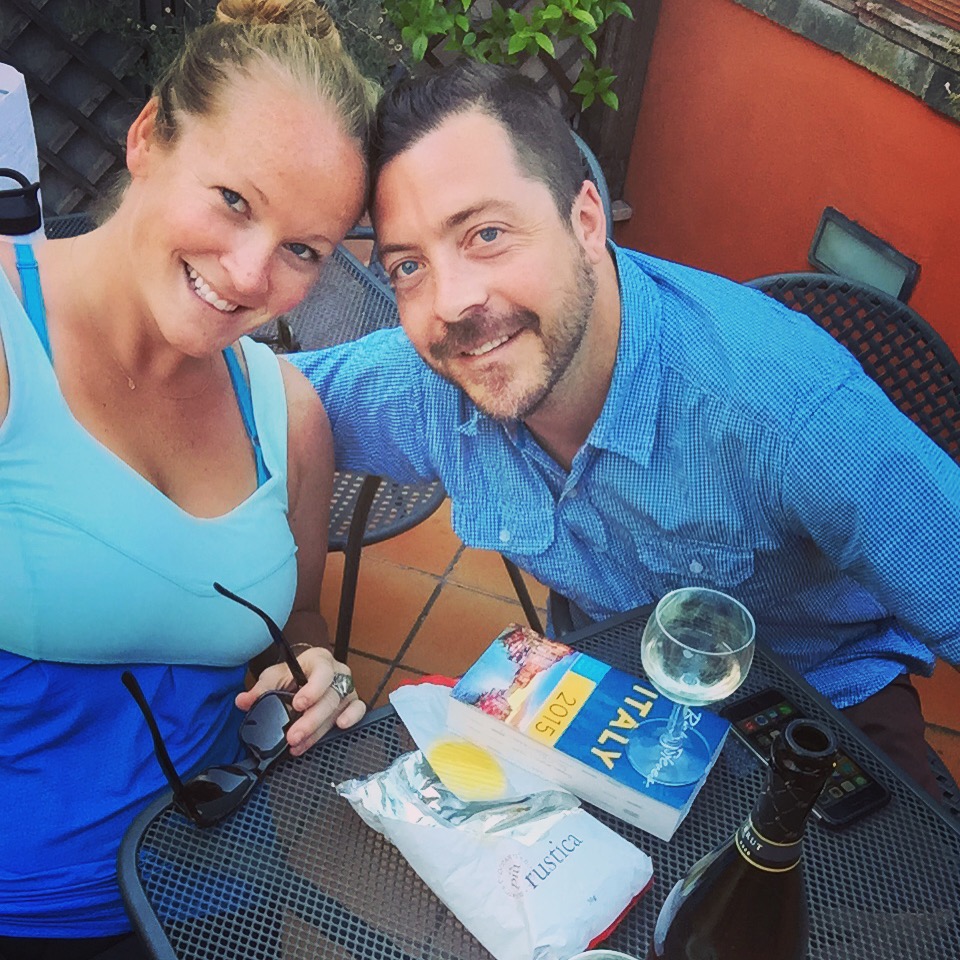 Tell me the story of you and Scott–

Scott and I met in Breckenridge through friends back in ’08. We started hanging out on our days off but that mainly consisted of going snowboarding together. Usually I was the only chick in the group. I think I inadvertantly ‘proved’ myself to Scott, since I could keep up with the boys on the hill. We liked to spend time together however that played out. Exploring Denver and other towns, catching music at Red Rocks, cooking and snowboarding filled up most of our time.  Scott was working some odd hours in property maintenance and I was mainly bartending, so he’d come and visit me, always bringing a wing man. We had a blast together in all we did. Sadly we both decided that we were moving away at the end of the season to explore different cities and careers. But we decided to enjoy what we had for what it was worth in the mean time.
Fast forward to May ’10, one of the hardest times in my life. That was it. We both left Breck. I headed to Italy with a best friend to explore, learn a language and even get a job in Florence. He headed to Milwaukee to see what city life was all about. Neither of us wanted our relationship to end, but it wasn’t up to us. Timing had it’s place in our lives and we had to follow through with the commitment we both made to ourselves, respectively. After coming back from my Europe adventures 4 months later, I landed a job in the DC metro area. Within a couple years, I was promoted to another role in San Francisco. But while I was away from Colorado, I still kept in touch with an amazing friend named, Ebs.  I even came to her wedding in May of 2014. After Ebs’ fantastic wedding weekend in Ridgeway, Colorado, I had plans to visit a friend back in Breckenridge. Now, originally this was Scott’s friend, but I became close to her and her husband while we dated. My friend just had a baby girl and was able to make time to meet the little nugget!  I had no idea my friend decided to call Scott and invite him over while I was visiting! Interrupting our conversation, she says, “Oh, you don’t mind that Scott’s swinging by do you!?” When Scott showed up, all the emotions, feelings and memories filled my heart. My healed heart. So I thought.
We ended up picking up right where we left off.  He even offered to take me back to the airport and in that time of conversation and catching  up, I knew there was still something there. But how could there be? It had been so long.  It didn’t matter, we kept in touch over the next couple months. I invited him out to see a festival in Golden Gate Park called Outside Lands. I mainly extended the invite to see if he’d travel to see me, but also because Atmosphere, one of our favorite artists was headlining. He came out to California for a 4 day weekend. The rest is history.  Now I’m back in Breckenridge with my best friend, who I get to marry in 7 months!

How did he propose?  All the sticky sweet details please–

Scott and I had planned a trip to the Bahamas to see his parents who live on a beautiful boat. They sold their place on Peak 7 and decided to explore what adventures they could on water for the next four to five years.  Unfortunately, 2 weeks before our trip the boat had an issue. A computer processor was malfunctioning and the Bahamas trip was cancelled for safety reasons. So we re-routed our flights to meet his parents in the Florida Keys where the boat was docked. We explored all around the Florida Keys, took the dinghy on adventures, ate amazing seafood and had sunsets every night off the bow of the boat, of course with a cocktail in hand. On my birthday, a storm decided to roll in and with it it brought crazy winds and lots of rain.  Luckily we got to go deep sea fishing earlier that morning. We had plans to go out for a birthday dinner but before we had reservations, we had planned a cocktail hour inside the salon on the boat.  We all were enjoying some snacks and drinks when Scott’s stepmom asked I open her card and gift. It was the sweetest Pandora bracelet with a fish charm, documenting our adventure on my bday with Scott’s family. Then, Scott handed me a card and as I opened it and read his note, he got down on a gentleman’s knee and asked me to marry him! I didn’t think it was real. I think I even blacked out for a few seconds! We kissed and hugged and then he put this beautiful ring on my finger made of bent mahogany wood with (my favorite) turquoise inlay down the middle. I obviously said yes and I vaguely remember Scott apologizing that there was no sunset. Apparently he had planned to propose on the bow of the boat as the sun set. Didn’t phase me one bit!  You can’t control mother nature just like you can’t control love. The beautiful fish charm not only documented my birthday adventure deep sea fishing, it stands as a reminder of being proposed to and how lucky I am to have found my love, my best friend and my life partner!!!

First of all–Awwwww!  Back to business, what have you found to be your biggest wedding planning challenge?

Finding the venue was the biggest challenge for us. We wanted to find a venue in Colorado but not in our home town.  As a wedding planner, I love the venues we work with but I wanted to feel like we had a semi-destination wedding. Selfishly, we wanted it all— a natural setting, with mountains in the background, an outdoor ceremony and a barn type setting for the party.  We also wanted a laid back venue that didn’t have a time frame for the ceremony and reception or an hard cut off time for music and and end to the party . Usually venues allot a six to eight hour window of time for you. That seemed super stressful and after visiting multiple venues like that, we decided to focus our attention on a venue that all

What has been the best thing so far about planning your wedding?

Making decisions is really hard. There are so many details you have to figure out, but brainstorming and then making decisions as a team has been the best thing about the planning process.

Can I say it again?  Awwwww!  Tell me about your wedding–

We’ll travel to Grand Lake for our special weekend where we will tie the knot under a birch arbor, decorated in live greens and flowers overlooking the mountains. We’ll have a light cocktail hour with cured meats, delicious cheeses and pickled veggies that Scott and I canned over the year. Our reception will be in a barn that’s connected to a big white tent where guests will eat. We’ve got an awesome caterer doing a backyard style dinner with delicious BBQ. Scott’s stepmom is an amazing chef and baker so she’s offered to make our cake! It’ll be a three tier naked cake and she’s making a bunch of different types of cupcakes for dessert.  We are serving a variety of local craft beer, red and white wine and two types of bubbly- my favorite rose and prosecco! There’s an indoor bar and an outdoor bar, market lights above cocktail tables and even fire pits for later in the evening. Our wedding is totally kid friendly and there’s even a sweet little petting zoo on site. The Colorado river runs through our venue so whoever wants to fish can do so whenever they want. Our wedding party will stay on site with us in adorable cabins. Guests can camp onsite or bring their pop-up campers. Best part of all, other than marrying my favorite guy, we’ll get to have our fur-baby with us! The ranch is dog friendly so Cali, our catahoula-retreiver pup will join us in the celebration as we officially become a family!

I can picture it in my head!  Seriously.  What would be one piece of advice you would give to all of those newly engaged brides out there?

Relax. Make a list of your “must have’s” and a list of your partner’s “must have’s” for your special day. Figure out if it’s the music, the food, the vibe or the venue that’s most important and communicate that with one another. Yeah, I’m worried certain things won’t go as planned but what I should remember is that our favorite people will be there celebrating us. We’ve got awesome BBQ, booze of some sort (maybe not everyone’s favorite- oh well) and music to groove to. The little things that don’t matter, really don’t matter. It will all work out and no one will know if the flowers weren’t what I had pictured or the decorations were slightly off. I have to remind myself that as long as I’ve got my other half there with me, the rest really doesn’t matter. Relax.
Posted in Engagement photos, Just Because | Tagged Colorado Engagement Season, Colorado Wedding, Colorado Wedding Coordinator, Colorado Wedding Planner, Day Of Planner gets married